Competing at the IHSA State Finals is the goal for every Track & Field athlete in Illinois. The Lady Eagles were represented by 3 awesome ladies. After a tremendous weekend of competition, the Eagles soared to a 13th place finish, the best in school history! Two out of 3 athletes return, setting the stage for an exciting 2019.
Despite this being her first State Finals in the Pole Vault, Noelle Jones did not show any signs of nervousness. The Junior cleared her first heights and got into a great rhythm. Attempting 10'9", Jones missed on all 3 attempts. She missed making the finals by only 3 inches. Overall she had an overwhelmingly successful 3rd year. She broke a school record and improved her best by a foot. Always ambitious, Noelle has set several big goals for next year. The rest of Illinois is on notice. 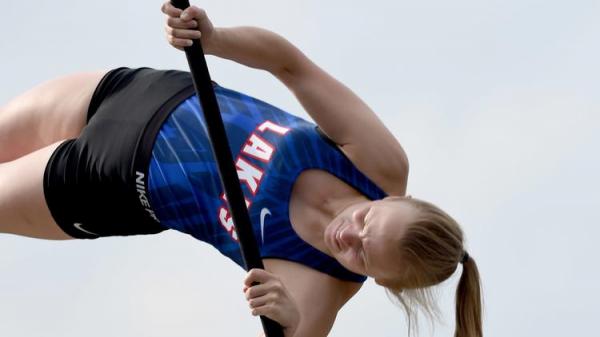 Olivia Schmitt returned to EIU to compete in the 800m run for the 2nd year in a row. In the prelims, the sophomore was calm and collected, despite facing off against the #2 800m runner in Illinois. Olivia went through the first lap with the lead pack of 3. At this time, the pair in front opened up a gap. Schmitt closed the gap over the next 300m, but finished 3rd overall. Her time was good enough for 15th place, just 3 spots and less than a second shy of making the final. Schmitt was a victim of a slow heat, but gained valuable experience in the process. Only half way done with her high school career, Olivia has established herself as a legitimate contender to win every race that she toes the line for. 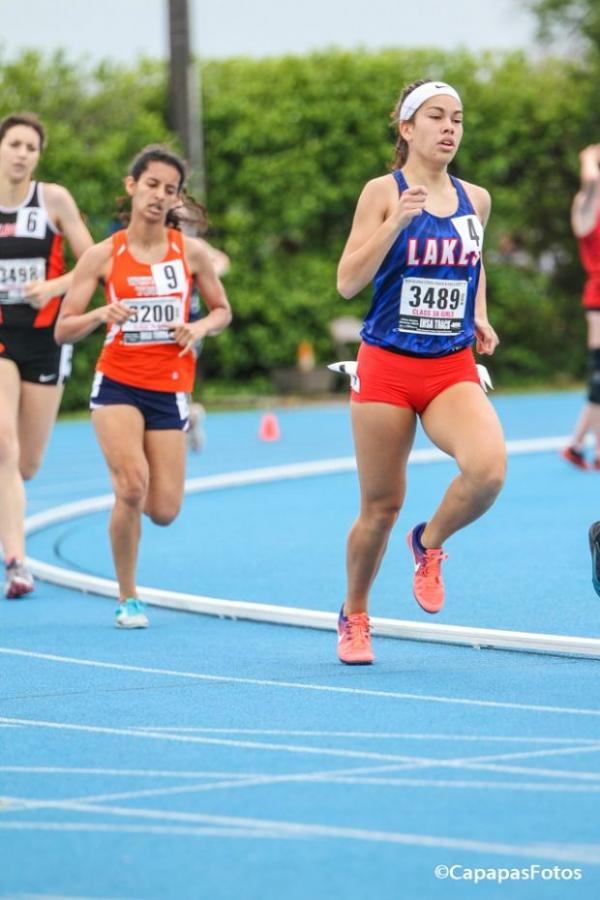 Every senior wants to close their career out with a bang. Finishing with a high place and/or new PR. Senior Taylor Tilmon did all that and more. With a smile on her face, Taylor made quick work of all 3 prelims. The only girl in the state to qualify in all 3 sprint events, Tilmon won each heat to advance to the finals. In the process, she broke her 200 and 400m school records. An impressive feat if you watch the races and realize that Taylor ran all by herself. The goal all along was to make the finals of all 3 sprint events. Taylor did what she had done all year long and ran her best. Admittedly a bit tired, a refreshing ice bath on Friday night rejuvenated the Senior captain for her final performance in a Lakes uniform. The results were nothing short of spectacular.
In the 100m dash, Tilmon got out of the blocks well and even with the leaders at 35m. She held strong, crossing the line in 12.13, 6th place and her 3rd fastest time ever. IHSA officials asked her to wait on the infield, but the rising temperatures had other ideas. Staying hydrated and cool throughout the day would be key to her success. Taylor rested up and returned to the blocks for the 400m dash.
Reigning State Champ Dajour Miles, lined up in lane 5 with Tilmon in 6. As she has all year, Taylor got out fast and kept it quick and smooth down the back stretch. With 200m to go, Tilmon was in 4th. Taylor waited until the top of the turn to unleash her best kick of the season. She raced passed two runners with her sights set on Miles. She continued to pull closer down the home stretch, but ran out of room. Taylor improved upon 7th as a Junior to take 2nd as a Senior. Her only losses during the 2018 season in the 400 were to Miles.
The 200m dash finals were the encore performance for the greatest sprinter in Lakes history. Competing in her 6th race in 30 hours, Tilmon cemented her status as a legend at LCHS. She executed her start and even had enough to chase down the field in the last 50m. She finished 5th overall, just .04 from 4th place. An unreal performance for the veteran eagle. Tilmon was all smiles following her 3 all state medals. She leaves as a 4 time All State athlete with 3 school records. Most importantly, she leaves behind a legacy of hard work and determination, of how to do things the right way and to be a good person. 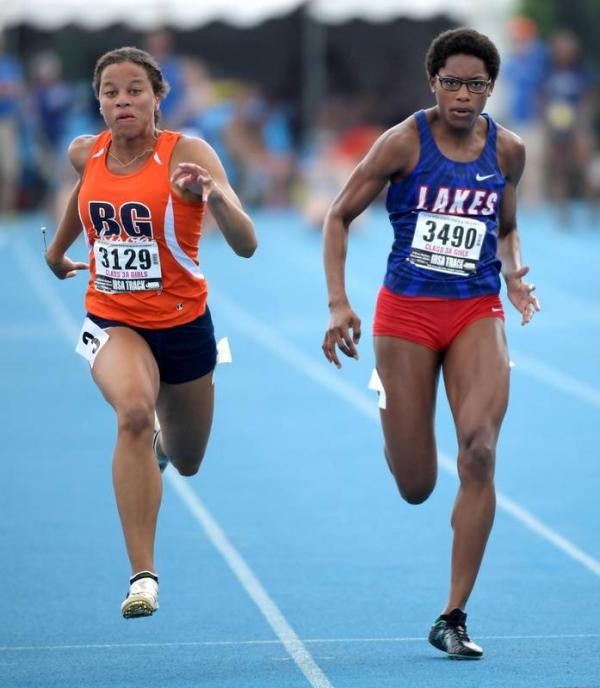